Neural mechanisms and brain structures underlying individual differences in acquisition of vocabulary and grammar of an artificial language. A neurolinguistic study of language aptitude. 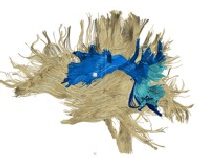 In my research I investigate language aptitude, a specific talent for learning foreign languages that has been extensively studied within the field of second language acquisition. In my project I approach it from a neurolinguistic perspective, looking into how, in terms of neural correlates, highly skilled learners differ from average ones on analytical and memory component of language aptitude.

There are large differences in the way individual human brains work and are built. For example, the size of different brain structures, the number of neurons used to perform certain functions and the integrity of white matter (bundles of fibres connecting different parts of the cortex) vary from person to person. Recent studies show that some of these inter-individual differences correlate with specific cognitive tasks, such as language learning. People differ substantially in their ability to learn languages which may be linked to the diversity of human brains. Despite the recent technological advances in neurolinguistic research, it is still largely unknown how success in foreign language learning can be accounted for in terms of its neural correlates, and why some people are faster and better language learners than others. The aim of my project is therefore to enrich insights into the neural mechanisms and brain structures underlying individual differences in foreign language acquisition. To this end I make use of neuroimaging techniques such as fMRI and DTI combining these with behavioural measures such as language aptitude tests.