The LIBC is an interfaculty center for interdisciplinary research on brain and cognition. The Leiden University Medical Center (LUMC) and the Faculties of Arts, Mathematics Natural Sciences, and Social Behavioral Sciences of Leiden University participate in the LIBC. In 2011 the LIBC hotspot Language was launched.

One of the core themes of the LIBC centers around psycho- and neurolinguistics. Niels O. Schiller has set up a Language and Cognition Group (LACG) which meets regularly to discuss ongoing work in the area of language processing. Members of that group include LIBC members from Cognitive Psychology and Linguistics as well as other researchers from Leiden University and external institutions. If you are interested in being added to the mailing list, please write an email to S. Von Grebmer Zu Wolfsthurn. 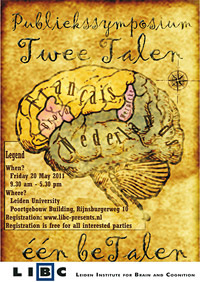